Comer Arrington, a World War II Air Force veteran, thought his days of military airplanes were long behind him — that is, until one flew over his home at Independence Village of White Lake.

Arrington was a crew chief during World War II and was on the second plane that landed in Berlin, Germany, during the Berlin Airlift in 1948. During his military career, he worked on C-47 planes. 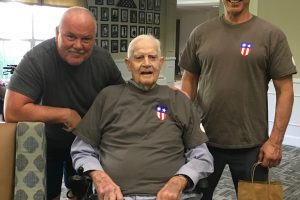 To honor his service, Independence Village of White Lake partnered with Yankee Air Museum in Belleville, Michigan, to fly the exact model aircraft Arrington was so familiar with over the community for Arrington to see. He was later able to meet and speak with the pilot about C-47’s and his time in the armed forces.

Our veterans have a special place in all our Independence Village communities. Read more about some of the other ways we support and honor these residents.